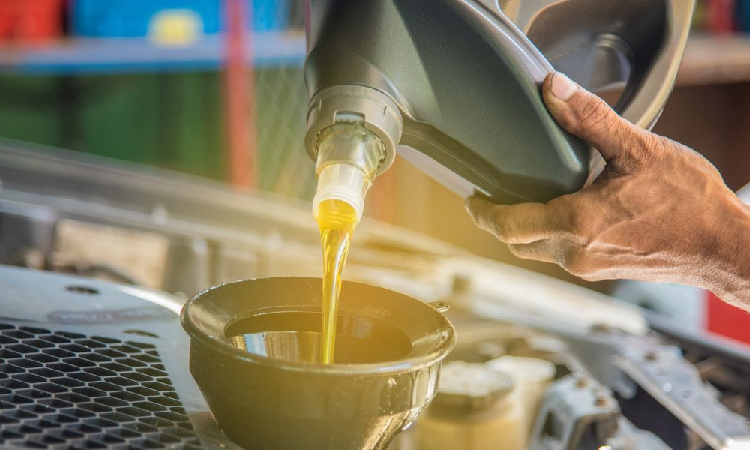 So today we’re going to discuss about engine oils, what the numbers mean and what you should

be thinking about.Before I go ahead, I’ll just tell you this, that in my experience, most people today make such good engine oils, that the difference between

a great oil and a good oil is not honestly that much.

50,000 kilometres later, I’ve never given it a second thought, and it runs just fine.

Better oils are better for your motorcycle, but the difference is not going to be huge.

Let’s talk about the number that you’ll see most often,

the side of the box.

Now, this is a specification created by the Society of Automotive Engineers, SAE, to give

you an idea of what the grade of the oil is, and

that is a representation of the viscosity of the oil.

Now viscosity is a very simple concept to understand.

If you take a jar of honey and a glass of water and you pour them, you’ll realise that

the water flows much faster and the honey flows very slowly, this is less viscous,

the honey is a lot more viscous.

Now, viscosity in an engine oil has multiple issues because an engine’s temperature varies,

and sometimes if you’re running an engine in the cold, the oil has to be strong enough,

but flow fast enough to be able to do its job,

but when the engine heats up, and it’s running at say an ambient 100 degrees Celsius, at that

temperature, the oil needs to continue to do its job and its job is very simple.

An oil, basically creates a layer between two metal parts, so that the metal parts can do

So the oil has to be strong enough and viscous enough, to be able to do this job at both of

these extremes of temperature and today, most of the oils you’ll see are multi-grade oils,

because they expect a vehicle to be able to operate in cold weather as well as in warm weather.

So the bottom number, the 12, 15, 10, is a lot less relevant to major part of Indian atmosphere, because most of

to the performance of your engine, the other number is a lot more crucial, because that

cooling system, whatever it is, is trying to thermally stabilise the engine, usually

around 100 degrees Celsius of coolant temperature.

Now, the thing here is a lot of people will say that, will I get a performance gain

Because the oil is less viscous, so you’ll lose

less on the friction and all of that, and

I would honestly tell you, don’t even bother because the difference is not big enough. So, what the manufacturers do is they put a lot of effort into testing and finding out what is the exact right grade to make that engine last as long as possible and perform as efficiently as possible.

When you change that grade unilaterally by your own decision,

put on those vehicles to figure out this is the right grade of oil, all of that data doesn’t matter.

And, think about it.

The only exception is, if you’re stuck on the side of the highway and you discover your

oil is low and you can’t find the exact grade that you use,

I think it’s alright to put any grade that you find as long as the spec is right,

so don’t put gear oil or lubricant oil by mistake, put engine oil, any grade that you can get so that you

can get to your destination and then figure out where to replace this oil with the actual correct grade of oil from.

The other number that you’ll see is a JASO or a API, which is the American and the Japanese based of a standard.

And that standard is basically defining the chemical and physical properties of the oil,

how they do under high pressure, under high friction conditions and etc. and pay attention

to that, so, if your motorcycle says JASO MA grade oils, then the MA grade needs to

go in, because MA specifically is for wet clutches, and therefore you don’t want to

change that oil to something else, because if you get the wrong oil, then your clutch

will suddenly stop functioning or have a different way of functioning whether might be more slip,

That’s the basics of engine oil, in all cases, it’s a lubricating oil, the three number set,

the 20W-40, that number usually denotes an engine oil.

Other kinds of oils, like transmission oil, they have other different certification systems

that also talk about viscosity, but the context is different, so don’t make a mistake and

put the wrong oil in your engine.

Try to stick to whatever grade the manufacturer recommends, it’s the best oil for your motorcycle,

also pay attention to the JASO and the API standards, they define the kind of oil that

the manufacturer thinks you should be putting into your engine, it is important to pay attention to it.

And finally, if you do get stranded in a place where your engine oil is low, find any other

engine oil, pour it in, get to your destination and then do a full oil change and you’ll be good to go.  As an international brand that has served millions of motorists, by manufacturing high-end synthetic motor oils, Veedol engine oil has carved its niche as a premier engine oil brand. Veedol oils are proven to enabling the best performance of your engine and help you enjoy a comfortable ride and peaceful ride. To learn more about all the parameters involved in your motor oil selection, visit www.veedolindia.com

How In Situation You Intend And Perform Extended Ride On Bike?

Things You Should Know Before Getting A Body Collision Repair

Details To Think About Before Choosing A Pickup

The best subcompact to lease in the market; Hyundai Accent.